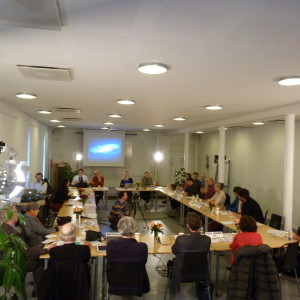 In December 2013 I was invited to the annual conference organized by Soteria International with the subject on Spiritual Human Rights that took place in Copenhagen. Co-hosted by several other international organizations, the subject was far more interesting than one might intuit from the title! The current state of affairs of spirituality in Europe is not at all a model of freedom and cooperation. It is however very important now for all those that are the players of the spiritual field to start debating about the view upon the freedom of spiritual practice and the way it is treated today. New laws against mind manipulations, some being reenactments of laws used by dictatorial regimes in the past (such as “the plagio law” of Mussolini during fascist Italy) are now specifically targeting the new religious and spiritual movements. The inquisitorial squads from the pseudo anti-sect NGO’s, secretly sponsored by governments (such as the FECRIS organization sponsored by France) are running rampant across EU and the mounting human rights files against them in the Strasbourg Court for Human Rights speak for their actions. This is the climate that made Soteria’s 2013 annual conference a very interesting opportunity to see both sides of the story and to look more closely at some real solutions. My contribution to this conference can be read in a separate article to be published soon.

Conference Preamble: Governments are implementing new laws across Europe, claiming to protect citizens from “mind manipulation”. In particular, the criminalization targets minority religions and spiritual movements. Our democracy is based on self-determination – the individual’s ability and right to decide for himself. The new laws suggest that this ability is threatened today. But are spiritual teachings the threat? Is criminalization the answer? If the individuals’ ability of self-determination is threatened, should it not be secured by strengthening the freedom of conscience, rather than by criminalizing certain thoughts or beliefs?

On 10th December 2013, Soteria International hosted the 6th Spiritual Human Rights Conference in Copenhagen with international experts, politicians, human rights activists and spiritual leaders coming together to highlight the fundamental human rights problems regarding the new laws about “mind manipulation” and their effects on self-determination and spiritual teachings. Guest speakers included Erik Rouk from EIFRE, Thierry Deval from CAP, and Neils Groth from DIF. There was also online participation from speakers in Germany and Italy.

Here is some background information about the conference: “When it comes to freedom of religion and belief, diversity and pluralism still appear to be challenging concepts in modern societies. Paradoxically, the situation is difficult also in countries with an established democratic tradition and strong commitments to respect fundamental liberties. Strong historical imprints of the traditional religions in a society, coupled with lack of education and understanding of various religious and spiritual systems, lead to increasing misunderstandings and polarization among populations.

Societies continue to struggle with acceptance of alternative and unconventional currents, particularly within the established religious and spiritual frameworks, and state authorities attempt to preserve a dominant control of the field. Otherwise, how to explain that many countries discuss the legislation against so-called “mental manipulation” at a parliamentary level? Several countries, including some EU member states, have already adopted such laws. In most of these legislative acts the formulations are general. However, their application particularly targets new and alternative religious and spiritual groups, wrongfully and abusively labelled by authorities and mass media as “cults” or “sects”. Examples of such legislative acts are the About-Picard law in France, the “plagio” law in Italy, dropped in 1981, but currently attempted to be re-introduced, the “Abuse of weakness” law in Belgium, the “Alteration or control of the personality” law in Spain, and many others.

At their foundation is the presumption that the “victim” has not had the ability to properly exercise his self-determination. To determine some choices of belief as derived from “mental manipulation” risks to corrupt the right of self-determination at a fundamental level. As the application of the legislation may go, basically anyone who joins an unconventional religious or spiritual group can be labelled as “brainwashed” and this argument can be used, as it is often so, to criminalize and dismantle the groups.Such legislation may eventually enforce a dangerous construct of discrimination, dividing citizens into those who adhere to common religious traditions or to none, and those who adhere to non-conventional traditions, basically labeling them as mentally dysfunctional as a result of alleged manipulations.

Discrimination of minority religions is nowadays recognized as a new form of “racism”. Many countries have officially published and disseminated lists with so-called “sects and cults” (such lists were officially endorsed in governmental reports in Australia, Austria, Belgium, Canada, China, France, Germany, Russia and United States). Some of these lists are very extensive and even include groups that do not position themselves as religious or spiritual, but rather as dealing with wellness and alternative medicine. Thus, what was presented by state authorities as an attempt to protect citizens, actually threatens their safety, since such measures fuel intolerance and public hatred towards the groups mentioned in those lists, leading to severe marginalization of their followers and imposing on them a condition of fear and hesitation or assumed risk to profess and practice their beliefs.

Having a history of being an instrument for oppression used by/ different forms of abusive power, this body of laws that are addressing such a subject need much more scrutiny and public debate than is currently being made. This makes Soteria’s 2013 SHR conference even more valuable and its international attendance a direct consequence of this acute need. Under the superficial justification of defending the citizens, the zealots of the current system of power are waging a war against everything that is different and any opinion that is not aligned with theirs. This now becomes a discreet movement that is sponsored by different governments (such as Miviludes in France) and it is collecting within their ranks the most far right extremists that propagate such a message of intolerance toward anything different that 60 years ago would have qualified them for fascist leadership.

The discreet activity of these social pressure groups is dictated by the very simple need to avoid public scrutiny since most of their positions are in obvious opposition to the public interest. Why else would such organizations keep their meetings in secret, away from the public eye and media, as they recently did? As a proof of this dangerous trend that is silently spreading across the world, here is a list of terms that one can find on the website of the Office of the Prime Minister of France. It is an extract from a report by French government agency, Miviludes (Mission interministérielle de vigilance et de lutte contre les dérives sectaires, i.e. “Interministerial Mission for Monitoring and Combatting Cultic Deviances”): Companies faced with cult-risks: the human and economic stakes, a professional challenge, published on December 9, 2011, pages 50 and 51).

”The list [below], non-exhaustive, covers terms or words which should trigger immediate questions from those individuals responsible for the economic safety of private enterprises. self-achievement well-being emotional control confidence information sharing self-knowledge weak points – strong points mental control selflessness personal development devotion search for meaning overall health self-esteem sense of sharing problem resolution strategy social development meditative therapy total conviction personal profile management of relational life self-fulfillment” The whole setup of the SHR 2013 Conference was very friendly and open, the participants and audience were well connected and interacting for the benefit of the general goal of the gathering. All the reports presented in the conference were an exceptional witness to the importance of this debate and the severity of this issue.

I greatly enjoyed the professionalism of the Soteria team that managed to bring together people from different backgrounds in a forum of debates that was both stimulating and relaxed at the same time. During the morning session we addressed the issue of minority religions and spiritual movements being specifically targeted by “mind manipulation” laws, exploring the background and consequences of this disproportionate attention. We concluded with a discussion on how to shed proper light on the on-going undemocratic situation with specific examples from Italy and France and exposed the general trends on legislation in Europe today. In the afternoon we went further with a roundtable discussion regarding self-determination, mind manipulation and religious teachings, looking at the fact that if an individual’s ability for self-determination is threatened by mind manipulation, this should be countered by a strengthened freedom of thought, conscience and belief. We discussed the role of authorities and the role of spiritual teachings in cultivating this inner freedom. We also formed sub groups, which brainstormed ideas on aspects specific to developing the subject at hand, including ‘damage control’, ‘media’, and ‘institutional support’.

I joined the group focusing on damage control in which we discussed the need for practical solutions, bringing together different countries in a common platform in order to show the level of damage and to provide solutions. In the end, the conference proved to be an excellent opportunity for the creation of a common platform of work and development of a real social dialogue. In this way all members of the society can begin to understand what is going on in their name and in the same time will start comprehending a new dimension of freedom: the freedom of spiritual practice. Even if there is much to do in this direction, the beginning is very promising and the need is bigger than ever, should we wish to avoid deviant extremisms that are now rapidly rising, being carried by the economic tsunamis that are successively devastating economies the world over. More details about the conference and videos are available on Soteria’s website.