21st of December 2012 – End of the World or Time for Transformation? 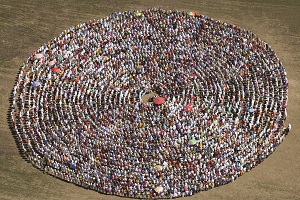 The yang-spiral meditations are a world-premiere initiative of the Romanian School of Yoga MISA. This initiative is a very effective method that is consistent with the worldwide efforts of raising the consciousness of Planet Earth and helping humankind enter into a superior stage of evolution. This group meditation helps participants experience the state of Cosmic Consciousness, giving them access to the universal dimension of their spirit. In the Oriental philosophy and also in the modern scientific paradigm, the manifestation of the Universe always contains a double aspect: light and darkness, sky and earth, positive (+) and negative (-), solar (of the Sun) and lunar (of the Moon). In the Eastern thinking, the solar, positive, male aspect is called Yang, and the lunar, negative, female aspect is called Yin. These two concepts are in fact the expression of the Universal complementarity and dualism. The clearest example of this duality is the electric current: in order to have electricity we need a positive pole and a negative pole. Only together they can produce electrical power. None of them is better or worse than the other. The same thing stands true for the yin-yang concept. Yin and yang cannot be separate: their mysterious rhythm is the force that creates the very life of the entire Universe.

The spiral is often seen in nature: the snail shell is a well-known example. The symbolism of the spiral is scientifically funded by the mathematical theory of the logarithmic spiral and of the Golden Number, or Fibonacci series. This Golden Number was discovered by the Italian mathematician Leonardo Fibonacci (c. 1170 – c. 1240), also called Leonardo of Pisa. Fibonacci numbers have many interesting properties and are widely used in mathematics. Natural patterns, such as the spiral growth of leaves on some trees, often exhibit the Fibonacci series. A consequence of this are the fractal structures and the discovery of fractal geometry. A Unique Planetary Experience of the Tremendous Beneficent Power of the Unison We will experience together on the 21st of December the intense healing and deep transformational effects of this unique moment in our history in a group meditation done in a counterclockwise (YANG) spiral formation that we will organize in Concordia, Natha Yogacenter. Similar spirals are organized worldwide in all our schools in perfect state of unison. Such spiral awakens the qualities of all astrological signs and balances our feminine and masculine sides. The unison of the entire group induces each participant with amazing power. We will meditate for the well-being of our city, country, planet and people and be in unison with thousands of groups that meditate world-wide this day using the exact same spiral-formation that fosters centering, spiritual awakening and raising vibration!

Evening’s schedule: 2:45pm – 3.15pm Welcoming of the participants and explaining the formation and the effects of a Yang Spiral Meditation in connection with the necessity of ascending to a new level of vibration on this historical moment. 3:15pm – 4pm Arranging of the participants in a spiral formation according to gender and astrological birth sign. 4:00pm – 5:45pm The meditation itself (all participants hold hands, special music will be used to induce the raising of energies to spiritual levels) 6:00pm-7:00 pm Collective Prayer to God the Father At 7 pm we will listen together to a new conference that will be sent for this occasion by Grieg. This special conference will be transmitted live online here.

Some of the Effects of the Yang Spiral Meditation In this meditation the participants (paired up man-woman) are holding hands and are arranged according to the succession of the 12 astrological signs of the zodiac. As a result of this arrangement, complex phenomena of resonance take place both with the beneficent influx of the yang energy and with the beneficial aspects of each of the 12 zodiac signs and of the subtle influx of their respective ruling planets. As a result, the subtle aura of each participant is charged with beneficial energy that balances and helps healing at a very deep level, accelerating in the same time the spiritual evolution of consciousness.

Directly proportional with the size (area) of the spiral and the number of participants, each person can thus have the direct experience of an intense state of bliss. Each person represents then a miniature replica of the Perfected Cosmic Human Being. During this yang-spiral, each participant (no matter his or her astrological sign) can experience the beneficial aspects of all the 12 zodiacal signs.

I look forward to meet this moment with love and light, together with lots of wonderful people and other beneficent beings in the whole world who embrace and choose the good in their lives, for our beloved planet Earth and the whole universe.