Courtesy of The Moscow Times [link of the website https://www.themoscowtimes.com]

Russians nationwide are staging a second round of protests calling for jailed opposition leader Alexei Navalny’s release despite a growing crackdown and threats of prosecution by the authorities.

Navalny’s allies called for new protests to demand his release after tens of thousands took to the streets nationwide at last Saturday’s protests, resulting in a single-day record of over 4,000 detentions. The Kremlin critic faces up to 3.5 years in jail in a trial that starts this week on charges of violating the terms of a 2014 suspended sentence while recovering from Novichok poisoning in Germany.

The days ahead of Sunday’s protests were marked by an intensifying crackdown against Navalny’s allies and family members, with his brother Oleg and lawyer Lyubov Sobol placed under pre-trial house arrest on charges of violating coronavirus restrictions by calling people to join protests. Authorities also issued an arrest warrant in absentia for Leonid Volkov, a top Navalny aide based in Lithuania, as part of a criminal case on inciting minors to attend unauthorized protests.

Moscow police had closed seven metro stations and limited pedestrian movement in the city center ahead of Sunday’s protest, an unprecedented move. The Moscow rally was due to take place outside the headquarters of the Federal Security Service (FSB), which Navalny says carried out the near-fatal poisoning attack on the orders of President Vladimir Putin, before a last-minute change.

So far, 2,948 people have been detained in more than 60 cities, according to the independent OVD-Info police monitor.

Here’s a live look at today’s events as they happen:

4:25 p.m.: A man has set himself on fire on Tverskaya Street in central Moscow, reports said. According to the 112 Telegram channel, the man survived and has been hospitalized with severe burns.

3:40 p.m.: Mass crowds have gathered throughout St. Petersburg despite heavy riot police and National Guard presence. In other parts of the city, a heavy police crackdown is seen.

3:31 p.m.: Police have cordoned off the Matrosskaya Tishina prison where Navalny is being held and are rounding up protesters there, the independent Dozhd broadcaster reports.

3:19 p.m.: At least 12 journalists have been detained in Moscow so far, the Open Media news website reports.

3:19 p.m.: A car with a golden toilet brush attached to its roof has been seen driving near the protests in Moscow. Protesters have carried toilet brushes — a reference to the $700 toilet brushes Navalny describes in his "Putin’s Palace" investigation — throughout the rallies.

3:10 p.m.: Moscow police used a taser on a protester and carried him away after he lost consciousness, according to video published by the iStories investigative outlet.

3:05 p.m.: Video shows a standoff between protesters and riot police in St. Petersburg.

2:35 p.m.: Police in Kazan reportedly forced protesters to lie face-down in the snow and remove their face masks to be photographed, according to OVD-Info.

2:12 p.m.: A crowd of Moscow protesters have started marching toward Matrosskaya Tishina, the high-security jail where Navalny is being held. Meanwhile, Navalny’s wife Yulia posted a photo of herself at the protest before being detained shortly after.

2:00 p.m.: U.S. Secretary of State Antony Blinken condemns the "harsh tactics against peaceful protesters and journalists by Russian authorities for a second week straight," calling on Russia to free those detained, including Navalny.

1:29 p.m.: A standoff between protesters and police takes place in the city of Chelyabinsk, with protesters chanting "We are unarmed." Meanwhile, a video of Chelyabinsk police pinning a protester to the ground as he says "I can’t breathe" spreads across social media.

1:24 p.m.: A large crowd has gathered at Moscow’s Komsomolskaya Square, shouting slogans like "Putin is a thief" while police detain people.

12:50 p.m.: Navalny’s team announces that the rally will move to the square outside the Komsomolskaya metro station and Leningradsky railway station. As protesters walk to the new location, passing cars honk their horns in support.

12:39 p.m.: Popular Russian rapper Oxxxymiron is at the St. Petersburg protest on his birthday, telling the independent Dozhd broadcaster that “My birthday wish to myself is to stop escaping my fears in the new year.”

12:34 p.m.: Entrances and exits to the Krasnye Vorota and Sukharevskaya metro stations in Moscow have been closed, the MBKh Media news website reports.

12:27 p.m.: Hundreds of protesters have gathered on Pionerskaya Square in St. Petersburg.

12:00 p.m.: Moscow police have arrived at the new protest site at the Krasnye Vorota and Sukharevskaya metro stations and have begun detaining people, including one journalist.

11:47 a.m.: Protesters in Yekaterinburg are crossing the frozen Iset River in a move to escape riot police, according to The Moscow Times’ correspondent.

11:44 a.m.: Video shows a violent police crackdown on protesters in the city of Kazan.

11:34 a.m.: Video from Ufa in the republic of Bashkortostan shows protesters chanting "Akvadiskoteka!" in reference to a meme about the aqua-disco inside the $1.3 billion palace Navalny linked to Putin in a viral investigation this month. A video of Ufa police dragging and detaining an elderly woman spreads widely on social media.

11:22 a.m.: Moscow police have closed off Lubyanka square, the site of the FSB headquarters and the planned location of today’s protest, and are only letting journalists onto the square.

10:49 a.m.: A large crowd has gathered in Russia’s fourth-largest city of Yekaterinburg, according to The Moscow Times’ correspondent. The Znak.com news website places the crowd size at 7,000 people.

10:27 a.m.: Security forces have begun to disperse the rally in Chelyabinsk with force after protesters broke through a police cordon, video footage shows.

9:59 a.m.: Observers report heavy riot police presence in central Moscow, both in the city center and in the residential neighborhood of Chistye Prudy.

9:47 a.m.: Local media in Novosibirsk estimate that 5,000 people attended Sunday’s rally, a larger number than at the protest last weekend. 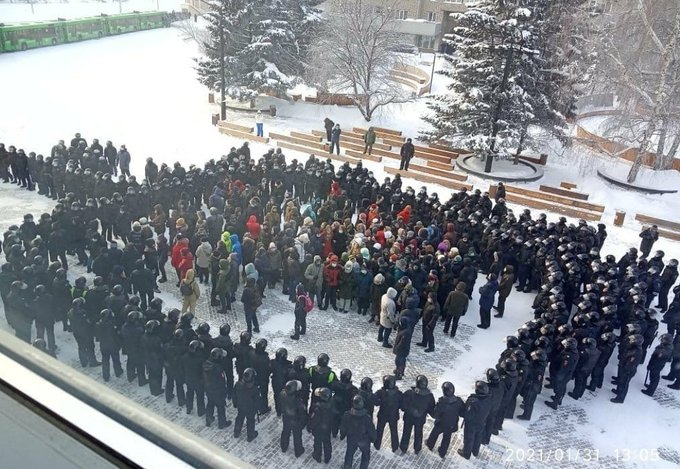 9:39 a.m.: Activists in the Siberian city of Irkutsk report that internet access has been shut off in the city for the first time in a move to prevent them from broadcasting the protest online.

8:27 a.m.: In Russia’s Far East capital of Vladivostok, protesters rally on the ice of the Amur Bay after police blocked off their original meeting point. Video shows protesters chanting "My Russia is in prison!"

6:50 a.m.: Residents of the city of Yakutsk in northern Siberia hold a small rally despite temperatures of minus 43 degrees Celsius, video footage showed.

This story is being updated.