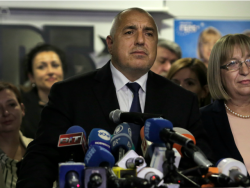 Bulgarian Prime Minister Boyko Borissov has resigned after his party’s candidate for the presidency lost heavily to a Socialist-backed rival seen as friendly to the Kremlin.

Article published by www.balkaninsight.com on 14 November 2016

Bulgaria’s centre-right Prime Minister, Boyko Borisov, submitted his resignation to parliament on Monday, after a left-wing opposition candidate defeated his nominee in the presidential election.

An emergency vote in parliament on his decision to step down is expected on Tuesday.

On Sunday, Borissov said he would step down after his favoured candidate, the speaker of parliament, Tsetska Tsacheva, won only 36 per cent of the votes in Sunday’s run-off.

Borissov also called for an early election in the light of Tsacheva’s defeat, which is also seen as a grave setback to the PM’s centre-right GERB party.

"In his letter to [MPs] the Prime Minister declares that the Council of Ministers [government] will continue to perform its functions until the election of a new government and will ensure continuity in the country’s governance," Borissov’s press office said on Monday.

Rumen Radev, who was backed by the Bulgarian Socialist Party and favours closer ties with Russia, won the second round of the presidential election on Sunday.

According to the Central Election Commission on Monday, after 99.3 percent of the ballots were counted, Radev won by a handsome margin with 59 per cent of the votes.

He will assume office for a five-year term on January 22.

Borissov on Sunday congratulated Radev on his victory but said it had "changed the political situation.

"From the results, it is clear that the governing coalition has no majority and cannot even pass the budget," he said.

A newcomer to politics, the former air force commander is seen as friendly to Moscow, with a strong stance against migrants.

“Why should Europhilia definitely mean Russophobia?” Radev asked, adding that such a polarity was unhealthy.

"Until recently, I flew a Soviet jet fighter. I graduated from a US academy. But I am a Bulgarian general. My cause is Bulgaria," Radev said, ahead of Sunday’s polls.