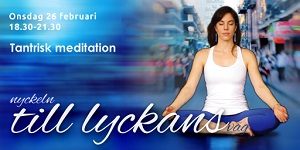 This week, on 26th feb, I will keep a lecture about tantric meditation in Stockholm. Meditation has been defined as “the state that appears whenever the flow of attention, which is oriented towards the target of concentration, becomes uninterrupted”. However, this definition carries the greatest degree of practicability, as it represents a genuine common denominator for the various spiritual systems which have used meditation as one of the basic methods for individual development.

Moreover, even modern studies on brain functioning have confirmed this fundamental approach on meditation, from several standpoints. Even so, when nowadays tantric meditation is brought up, one can hear an entire range of speculations and sometimes even important mistakes in approaching this topic. These particular mistakes are defended by invoking apparent chief differences between the traditional yogic path (of ascetic character) and the tantric path.

Nevertheless, precisely this separatist approach defies the principle of unity in diversity. As a matter of fact, many wise men, belonging to different spiritual traditions, have talked about the stunning unity that exists between all the existing spiritual paths. In the case of this insight, differences frequently unfold to be no more than various standpoints upon the same Reality.

Following the same line of argumentation, even though meditation on the tantric path displays specific features, one mustn’t forget that MIND MECHANISMS AND THOSE OF THE MEDITATIVE PROCESS ALWAYS STAY THE SAME AND THAT’S WHY ONE CANNOT INVENT METHODS THAT WOULD USE SOME OTHER FUNDAMENTAL MECHANISMS. Reason for these is the very fact that, no matter the attended path, human beings (beneficiaries of spiritual paths) remain structured in precisely the same way. So, even if meditation is used in Tantra for acquiring effects, particular for this spiritual path, the specific mechanisms of mediation will always remain the same. In the following parts we’ll aim to point out the particular way in which the tantric path integrates meditation, however, we will not do this to highlight differences, but for a deeper comprehension of the mechanisms, which have made it so that meditation has become a genuine, irreplaceable instrument on the tantric path.

On many different spiritual paths it is frequently used as effective modality to eliminate mental agitation. The practitioner sees the entire manifestation as an illusion, which results from the ephemeral game of his perceptions and desires, blended in a chaotic manner by the mental sphere that, in its turn, has escaped the conscious control.

Through perfect focus upon the object chosen for meditation, he succeeds in eliminating the confusion of the senses, thus reaches to “see” beyond mind illusions. By means of this, a backwards crossing of the path is achieved, from matter to spirit or from what, due to ignorance, used to be considered real, towards that which is always alive and true inside one’s own being.

The clarifying example, frequently used to depict the deficiency solved by meditation, is the following: if someone enters a room where light is quite weak and there is a rope on the floor, he can take that rope for a snake and it might even happen that he gets very scared. The many different spiritual paths suggest an awakening from the illusion, which unavoidably leads to this confusion: one must realize that not even the rope exists, in the very sense which we confer to existence and that in fact, the rope is but a projection of our senses. Yet our true nature is free of all these conceptual fabrics, which unavoidably lead to confusions that are going from bad to worse.

Therefore, no matter how much we would strive to notice that there isn’t any snake, but only a rope, in order to completely eliminate the possibility of an error, we must in fact realize that we ourselves are the source of the entire construction (rope which is later on taken for a snake). Thus, we can realize that the light of our consciousness is the one highlighting the existence of those objects, of the rope and of the room in which it apparently exists. Through intensive meditation, the aspirant reaches to transcend the uncontrolled agitation of the mind and to gradually realize his essentially divine nature that exists in the true source of all and everything.

However, this approach has been a radical one, eliminating, as much as possible, almost entirely, any interaction with existence. This is the path of mortification of the body and of the other aspects of the being, in order to acquire that transcendent silence that enables the sudden and direct realization of this essential truth. Even if it seems simple at first sight, this path is addressed only to those very few who are able to afford the “luxury” of completely withdrawing from the experience of the world. In this way the path is addressed to those who have already succeeded, to a great extent, in appeasing the fire of worldly passions and desires. This condition represents in itself a very severe selection for the majority of spiritual seekers.

The reply offered to this situation by the tantric path is truly redeeming: starting from the divine origin of all that exists and from the holographic structure of the entire macrocosm, the Tantra system offers the chance of spiritual evolution, here and now. All aspects of existence may be and must be transformed into genuine spiritual methods when correct attitude and adequate knowledge exist.

In this particular context, Tantra approaches meditation, first of all, as efficient method for achieving perfect and conscious identification with the object of meditation. In the course of daily life, our personality and its experiences are the result of a long chain of unconscious identifications with thoughts, states, perceptions, concepts that appear in the field of our attention. Thus we reach to the point of identifying ourselves with that which mostly attracts our attention, we gradually ‘agglutinate’ with materialism and with an existence dominated by illusions and phantasms. Nevertheless, same process of identification (which in fact is inborn ability in human beings) might bring us into contact with more and more elevated angles of existence, on condition that we are able to control this process, at will.

Hence, a tantric practitioner consciously uses identification, as real spiritual ladder, through which he can traverse the backwards track, from enchaining ignorance to the illuminating awakening that provides freedom as well.

Due to these arguments, in Tantra, meditation isn’t only used to purify mental agitation (fact that in reality is but an initial circumstance for perfecting a meditative process), but also for harmonizing the entire being and for obtaining an expansion of the individual consciousness, through a gradual and conscious identification with increasingly elevated angles. In order to reach a direct realization of the immortal Supreme Self ATMAN, yet without falling back into the illusion of the ego, the aspirant on the tantric path will gradually expand his consciousness THROUGH THE PERFECTLY CONSCIOUS IDENTIFICATION – SAMYAMA (from Sanskrit) – WITH THE DIVINE ASPECTS OF THE MANIFESTED UNIVERSE.

For an even deeper comprehension of this particular specificity of meditation on the tantric path, let’s take a simple model. There has been much talk of spiritual realization, considered as journey, across the ocean of illusions and miseries, with the purpose of reaching the other shore that represents the land of spiritual freedom and Divine Consciousness.

From ascetical viewpoint the journey across this ocean transforms meditation into a glass with steam. The “engine” of such a glass uses the heat released by the force of tapas (Sanskrit – individually sustained spiritual efforts) and of the sacrifices performed by the aspirant in order to cross the ocean of illusions. Still, many times this ocean is full of storms, bestirred by people’s passions and desires, which can destroy the tiny steam glasses of spiritual seekers. Then all they can do is to get out of the ways of storms of passions or of occasions which might wreck their spiritual navigation system. From another perspective, the path of Tantra uses meditation to acquire a contemplative state, in which the aspirant gradually assimilates the force of events appearing in his life. Metaphorically, this will transform the steam glass into a very elegant sailing ship. The well-trained and disciplined mind will be able to catch in its sails the “wind” of desires and will transform them into propelling forces, by engaging the processes of tantric alchemy. This way the journey becomes very efficient. The vehicle of tantric meditation will easily and rapidly cross the pilgrim over the ocean of illusions and yearning desires, through the usage of the same power that otherwise could have just sent the ship to the bottom. The force of storms is not anymore feared or avoided, but efficiently used to attain the final destination.

Nevertheless, few are those realizing that, in order to be able to correctly integrate meditation on the tantric path, it is needed to first train the basic element: mental CONCENTRATION.

This remains, as well, one of the occult reasons why, in the ancient tantric texts, Shiva (the supreme masculine Consciousness) is depicted as alternating periods of intensive manifesting in which he cherishes the beauties of the world, with periods of retreat, in which he used to intensively practice the tapas of concentration!

Once our concentration is almost perfect, we’ll be able to enter a meditative state, irrespective of location, conditions or of the object chosen for concentration. This independence from exterior conditions is essential on the path that aims to transform life’s experiences into a genuine spiritual practice of its own kind. Tantric methods of spiritualizing life are not intricate by themselves, yet one of the obstacles, most difficult to surpass, is the incapacity of the human being to remain focused upon the goal or even in the midst of the most intensive experiences. That’s precisely why, tantric meditation is not just a method to increase the individual’s capacity of enjoying life’s experiences, but also to simultaneously remain focused beyond appearances.

And that is the first condition for the complete assimilation of a particular experience, which represents the fundament of an experience of consciousness’ expansion. Tantric meditation is mistakenly described as being a “dynamic” meditation. It is indeed a meditation that may take place in any conditions, even in dynamic ones, yet meditation in itself remains the same in any system: an uninterrupted flow of attention towards the object of meditation. The modality to integrate the effort of attention is an essential key, obtained by the tantric adept through the meditation practice: concentrating one’s own attention must become a voluntary and perfectly relaxed action, entirely free of any effort.

In these precise circumstances will the tantric practitioner become able to focus upon anything (previously chosen) and to very well focus, even when the aspect, upon which he concentrates, constitutes an immense source of pleasure or delight. By remaining relaxed and focused upon that particular aspect the practitioner enters that contemplative state, which will enable his consciousness expand through the complete assimilation (conscious identification) of the contemplated aspect. Here it is why Tantra is defined as gradual and controlled expansion of the consciousness, from finite towards endlessness. Hence, this is how meditation becomes the decisive instrument for this process.