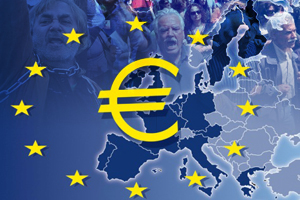 These days we can all see the European continent shaken by the waves of a crisis that seems to have an intelligence of its own. Or maybe it has an intelligence behind it that is governing its moves. Either way, through careful consideration one can see that the patterns of this crisis are constantly favoring some and constantly de-favoring others.

Such a preferential crisis makes me wonder “cui prodest?” Apparently the efforts to contain the crisis have been partially successful, but strangely that part of success always falls to the advantage of the central European authority and constantly avoids the national interests. In the meeting of the Budgets Committee on 25 April 2012, the European Commission asked for a budget increase of 6.8% for covering their expenses. This comes while the same authority imposes austerity measures that weaken the national governments and make the national authority lose its power.

Apart from the obvious message of hypocrisy that we get from such behavior, (for hypocrisy has today become embedded in the political attitude to the point that it has become the standard), one can also see that the crisis has a purposeful direction, discreetly but firmly imposed by the very central power in order to consolidate its position by weakening the position of the local authorities.

Member states are pushed over their limit and forced into the unknown economical realm. The local authorities are therefore put into the position to take all the blame for the austerity measures while the EU remains the savior that brings resolution to the crisis. After repeated failures by the local authorities to withdraw from the situation they have been pushed into, the EU organisms become more aggressive and vocal, showing that the central authority has to take action to stabilize the situation. And for this they lend back the money they have taken from the ones that are now to be saved.

We have already seen this in Greece, Italy, Spain, Ireland and Portugal, and recently the Dutch government fell under the pressure imposed by the European authority. As you can see here, even Germany is served the same menu, albeit a milder version since they are the engine that moves the whole construction further. We can see that on one hand the national power is constantly under threat and is left almost blinded, becoming increasingly dependent on the central authority, and on the other hand everyone can see the over confidence of the EU officials that seem to know exactly where the whole crisis is heading and to be taking drastic decisions without any hesitation. That kind of confidence in the middle of a crisis can have one explanation: the crisis is intentionally forged for the very purpose to consolidate the power of the EU over the national power, using the classic manipulative scheme PROBLEM – REACTION – SOLUTION.

In fact this is the policy of making yourself look taller by shortening the heels of the others.

If we look generally at the recent developments in Europe this scheme become obvious. While the local authorities are drastically cutting budgets (thus losing power and the credibility of their people), the EU central power is asking for a budget increase in order to strengthen its power and position.

As an exercise of discernment, please read here: http://online.wsj.com/article/BT-CO-20120425-715082.html . It explains how the president of the EU parliament, Mr. T Schultz, is using the possibility that the EU might fall apart as a threat. But it is not this perspective that clearly stays behind the lines. It is the fact that the local authorities are demonized for exerting their power that now, in view of this created crisis, appears as a bad idea. Within the lines of Mr Schultz’s statement we find clear evidence of the above mentioned manipulation scheme. He is putting every national power that tries to take care of its own people as a threat to the integrity of the EU. In other words: “EU at any cost.”

This scheme of thinking goes along with the procedure to push the national authorities into chaos and then to transfer the control from them into the central power. National governments are labeled by Mr Schultz as xenophobic and irresponsible because they make decisions to serve their interests while the EU is positioned as the only possibility to avoid the crisis.

In this way, what was rejected by the citizens of Europe is now gradually and discreetly imposed as a fact and I see that not so far down the track the time will come when national governments will be reduced to minor local councils that deal with small issues and have no legislative power whatsoever. Most probably this rhetoric given now by the president of the EU parliament will become in the next days the leitmotif that we will hear from most EU officials: “give us more power and we will save you from the crisis your authorities inflicted upon you”.

Hopefully there are more people awakening to this scheme that some power-thirsty political “clans” are putting into motion in Europe.