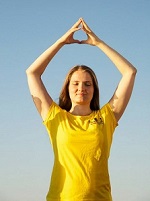 Most modern yoga classes and books have lost the secret key of Hatha Yoga. The true purpose of the ancient practices of the yoga system is to bring a superior balance and awaken the subtle energies of the body. It is not so much a physical practice but a spiritual practice based on SHAKTI, the fundamental vibrating energy of every human being.

Hatha Yoga is an age-old discipline of Yoga. Hatha comes from "ha" - solar (+) and "tha" - lunar (-), the harmonious union of the two opposite aspects in the human body. The practice of yoga postures (ASANAS) aims to open and purify the energy centers (CHAKRAS) and energy channels (NADIS).

Our goal is to introduce in Occident an initiatic or paranormal approach to the practice of asanas. At the present moment, the literature about asanas is rich, however, it presents a major flaw - it focuses exclusively on the exterior, exoteric, aspects, leaving the hidden, esoteric aspects unknown. But how is this possible ? Let’s see Â… first of all, the tantric masters who really know the secrets of Hatha Yoga chose not to reveal to the large masses their esoteric knowledge on asanas, preferring to transmit this information "from mouth to ear", never comitting it in writing. Even the most famous texts on Hatha Yoga : Hatha Yoga Pradipika, Gheranda Samhita and Siva Samhita are at best very elliptic, never offering a plain explanation for everyone to understand.

The second reason for this regrettable situation is the lack of deep mystical experience of the most yoga instructors and book authors from our days. As a result, there are a number of wide spread misconceptions about Hatha Yoga. Asanas are not mere physical exercises and they are not meant simply for health and relaxation. We submit to your attention the concept of asanas as paranormal training exercies.

The secret of ASANAS The subtle body has seven principal energy centers and many secondary ones. When a yogi performs an asana, the specific configuration taken by the force centers (CHAKRAS) creates a connection to the corresponding subtle energies from the Universe through the process of RESONANCE.

"Resonance" comes from the Latin "resonare", which means to resound, to vibrate. The process of resonance comprises two systems, in our case the human being and the "macrocosm" or universe, which have a common vibration frequency. The asana helps the yogi "tune in" one of the infinite spheres of energy of the macrocosm. In order to achieve this process of resonance the yogi mentally evokes the desired effect while performing the asana.

The practice of asanas is at least as much a mental practice as it is a physical practice. Let’s take for example Bhujanghasana, the Cobra Pose. When a yogi performs this pose all he has to think is "pure love" and concentrate on his heart chakra. This is the secret key of Bhujanghasana, and if it is used properly it will induce resonance between the yogi’s heart chakra (anahata chakra) and the infinite macrocosmic sphere of love (maha anahata chakra), transferring virtually unlimited quantities of the love-energy to his heart.

There is a perfect correspondence between one’s own chakras, located within the microcosm of the human subtle body, and the exterior, infinite chakras of the macrocosm. Everything that exists in the macrocosm exists in us as well and something that does not exist inside of us does not exist in the macrocosm - this is the law of correspondence. However, while in the macrocosm all the subtle forces are perfectly energized with infinite power, in the microcosm they are often dormant, existing only in a state of potentiality. For example, one person may, in theory, have the possibility to experience pure infinite love, the same person may not actually experience this love because of a lack of resonance with the same types of energies from the macrocosm.

The law of correspondence associates every psychic energy with a specific form, color, sacred word and musical note. For instance, Muladhara Chakra, the force center of vitality is associated with the square, the yellow-brown color and the "LAM" sacred word.

This is the first time the correlation between asanas and force centers is revealed. This step is unprecedented in the Occident and opens the door for a deeper and more spiritual approach to asanas. In fact we can say that there is no "real" Hatha Yoga outside the practice of chakra meditation and chakra awareness.

A common man looking at a yogi practicing asana may imagine that what he sees is all there is to it. In fact, the secret of asanas is not the posture itself, but the mental concentration associated with the execution. That is why many have seen yogis performing Hatha Yoga and considered that they too would be able to do the same by mimicking their pose. Nothing can be further from the genuine practice of asanas.

Hatha Yoga is approchable by everyone, even by convinced materialists New Hatha Yoga students are not required to have unquestioned faith, all they are required to have is openness of heart and mind and the will to give a fair chance to its system of exercises. Many new students were convinced materialists and they came to the yoga class only for health problems. However, the practice of yoga resulted in a more acute understanding of one’s own, native religion and this understanding resulted in an opening of the heart towards it. By gradually purifying the structure, starting with the physical and finishing with the mental, the Hatha Yoga exercises bring a new world of capabilities and feelings for the open minded student.

Kundalini Yoga and ASANAS Kundalini is the name of the most fundamental energy-force in the human being. The awakening of this fundamental energy, Kundalini is experienced by a large number of yogis and "ordinary" people all over the world. This "force", although poorly known in the Western sciences, is the main vehicle of men towards the revelation of the Supreme Self and the attainment of ultimate spiritual freedom. In most "ordinary" people the fundamental energy Kundalini is dormant. It’s location (in the dormant state) is the sacral plexus (MULADHARA CHAKRA), but when it is awakened, it raises from center to center, up the spinal chord (SUSUMNA NADI) until it reaches the crown center (SAHASRARA), accompanied by extraordinary emotions and states of consciousnes. Kundalini pierces the seven force centers (CHAKRAS) and generates the state of spiritual illumination Â… but the experience of Kundalini is not without perils. The spontaneous or accidental awakening of Kundalini can cause a great deal of pain and even psychic problems. These sufferings are caused by the energy overcharges in the subtle body. The "impurities" of the subtle body are "burned" by Kundalini and this often is a painful process.

Of course, if the awakening of Kundalini comes after attaining a solid training in Hatha Yoga, if the chakras and nadis have been purified with asanas and pranayama (breath control exercies) then Kundalini is no longer a cause for painful experiences - but a source of extraordinary bliss and sublime feelings. Kundalini is the fastest path towards ultimate spiritual freedom and Hatha Yoga is the best way to prepare for its awakening, because both asanas and Kundalini work on the same subtle force centers (chakras) and subtle channels (nadis).

Opening the heart and finding the soul though ASANAS The correct practice of Hatha Yoga produces a gradual awakening of the seven force centers. With the activation of the first center (muladhara), we gain a state of excellent vitality. With the activation of swadhistana chakra, we ensure the capacity for harmonious social interactions and a healthy sexual appetite. By activating manipura chakra, we amplify our will power. By opening anahata chakra (the heart chakra), we gain the capacity to love infinitely - a divine state of pure love, without having a particular object to be directed upon. Vishuddha chakra induces a state of great purity and deep spiritual intuition. Ajna chakra gives us perfect control over our subtle body and the paranormal power of clairvoyance. Finally, sahasrara is responsible for the state of union of the human being with the Absolute Transcendence, the most elevated state of consciousness.

Somewhere on this way, by balancing the feminine and masculine aspects of our personality, by opening up so that we could resonate with the benefic energies of the macrocosm, Hatha Yoga facilitates a profound transformation of our inner being. Our consciousness is expanded to the infinite, the heart is filled with bliss - this is the actual experience of many people who walked this spiritual path.

Practicing Hatha Yoga By contrast with the normal approach in sports, asanas do not intend to increase the muscular mass, the force, speed or endurance - they don’t aim for effort. In fact, asanas are the exact opposite of aerobics and other sports. The keyword here is "suppleness". The practice of asanas should not be accompanied by effort.

The asanas are conceived in such a way that the muscles are not involved in their execution. Instead of compressing the muscles, an asana elongates them. The joints and the muscles are stretched and this does not require effort. In fact it is normal that after a couple of hours of Hatha Yoga a practicant should feel more energetic and vibrant than in the beginning of the session, as opposite to a sports practicant who usually feels tired and worn-out.

Here is a list of simple rules that are of great help when practicing asanas :

choose a certain time of day and practice asanas at the same time every day the place for practice should be private and away from agitation; you need a quiet retreated place that will give you privacy for the duration of your exercises

it is recommended that you practice on a blanket that can cushion you from the cold or hard floor before starting the sequence of asanas, you need to do the warm-up exercises; do not avoid them because otherwise you may harm yourself while stretching in asanas

while performing an asana do not let your mind wander around; instead, focus on the specific chakras that are associated to that particular pose. Remember that asana practice is a form of meditation. If you do not focus on the right chakras, the spiritual efficience will drop under 5%.

after the execution of each asana you want to take a minute to fully assimilate into your consciousness the specific effects; this consciousness-awareness phase can be executed in a comfortable position and is a key to success in Hatha Yoga

it is much better to do 20 minutes of Hatha Yoga every day than a one-time two hours session every week; do not overdo it in the beginning because you do not want to last only a couple of weeks, you want to keep the practice up for many years

by maintaining the same time and location you establish a benefic resonance that will help you a great deal in the long run; when the time for yoga comes you will feel "magically" attracted to start practicing asanas executed in group are much more efficient than asanas performed alone; the more people executing the same asana at once, the better; responsible for this increased effect is the same "law of resonance", only in this case 1 plus 1 gives more than 2