Gregorian Bivolaru from the other Side of the Mass Media: the Exception That Confirms The Rule 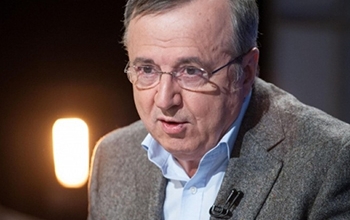 After tens of thousands of articles and TV news that present only one point of view about Gregorian Bivolaru and the MISA case, during the more than 20 years of Romanian post-communist journalism, we can count on the fingers of one hand the names of the journalists who asked the other side something, who investigated by themselves and reported their findings.

To this extraordinarily select list I can add today another name: Ion Cristoiu. He is a heavy name in Romanian journalism and is now one of the very few who have dared to look behind the media smokescreen, straight into the core of the problem … and dared to speak out. Cristoiu is not foreign to Gregorian Bivolaru’s case, he was the one cornering former Romanian PM, Adrian Nastase, to make him admit that the unprecedented 2004 police and media attack on yoga school MISA cost him the presidential elections that year.

Now when Gregorian Bivolaru has been arrested in France and is facing extradition to Romania, and when the Romanian media campaign has started to look very much like the preparations of a public execution, raising a voice of reason represents a proof of human dignity and character. This is why the list is so short on this side of the news.

Presently he is a reputed blogger with a large audience. The following article was published on his blog on 29th of February 2016. Article by Ion Cristoiu taken from here

How can it be, Gregorian Bivolaru doesn’t have the right to defence?!

Gregorian Bivolaru’s arrest in France has brought to our topsy-turvy media the question, used over and over again until it’s lost all meaning:

To the question who does Gregorian Bivolaru’s arrest profit, many answers have been given.

All of them implying that many politicians secretly attended MISA’s classes and Gregorian Bivolaru will expose them once he’s brought home.

Under the mark of Who profits? but modified as Who trembles? the television channel Romania TV remembered (which is something commendable) an interview made by the undersigned with Adrian Nastase after he lost the 2004 elections and before he was imprisoned.

In this interview I claimed, even asking Adrian Nastase about this, that the former Prime Minister lost the elections also because of MISA.

Starting from this, people from Romania TV quickly drew the conclusion that Gregorian Bivolaru’s arrest makes Traian Basescu tremble, given the fact that MISA helped Traian Basescu win the elections.

As I had taken the interview, I was summoned by telephone to give my opinion regarding whether Traian Basescu was helped by MISA to win the elections or not.

People from Romania TV were set on the idea that Traian Basescu was helped by MISA, for this they also used my interview of Adrian Nastase as an argument.

I ineffectively tried to tell them that I didn’t say that in the interview even for an instant. MISA’s role in Traian Basescu’s election victory is not due to a trade made by Traian Basescu with MISA, but due to the resounding imbecility of our authorities at the time of Adrian Nastase’s government. So, at the end of day, Adrian Nastase massively contributed – by the way in which the anti-Bivolaru operation took place – to losing the elections because of himself.

Due to the fact that not much was understood from my intervention on Romania TV, I feel the need to explain here the role played by the MISA case in Adrian Nastase’s election loss.

On March 18, 2004, 300 police and paramilitary forces, under the direction of prosecutors, raided Gregorian Bivolaru’s apartment and buildings of MISA members during an oversized power operation with the abusive behaviour typical of a “banana republic”.

Gregorian Bivolaru was sentenced on June 14, 2013 by the HCCJ to 6 years in prison for sex with a minor in repeated form.

This accusation came after two other courts, the Sibiu Court and the Alba Iulia Court of Appeal had acquitted him.

And do you know why?

Because the prosecutors could not bring any evidence.

Furthermore, they refused in both courts to file the warrants for authorization of wiretaps on the grounds that it was a state secret.

Let us admit that Gregorian Bivolaru was living with a minor, even though the girl claimed throughout the trials, including the one at the HCCJ, that nothing like that ever happened, and more than this, that she was physically molested by prosecutors into declaring that she had sexual relations with Gregorian Bivolaru.

As it was deployed and displayed on TV channels, this raid seemed to be made against some drug cartel in Colombia, by SEAL troops prepared to meet armed resistance.

Undoubtedly, the operation of the Romanian authorities was an unspeakable abuse.

The way it took place, the press releases of the General Prosecution, and the press campaign fueled by the Romanian Intelligence Service at the time, gave to a simple police action (the arrest and search of a person) the rank of an abusive action against MISA.

Moreover, this impression was amplified by the flow of harsh official charges directed at Gregorian Bivolaru (sexual perversion with a minor, trafficking of minors, sexual corruption, sex with a minor).

Of all these accusations, only one remains.

In these circumstances, it is quite natural that in Stockholm, Sweden, the Supreme Court, seeing how the Romanian authorities behaved, granted political asylum to Gregorian Bivolaru in December 2005.

The Supreme Court held that Mr. Gregorian Bivolaru was a victim of unspeakable abuse by the Romanian authorities.

The “Banana Republic” operation on March 18, 2004, visibly directed against MISA, aroused the hatred of the members of the organization towards then Prime Minister, Adrian Nastase.

The year 2004 was marked by strong protests from members of the organization against the government, against Adrian Nastase.

In the 2004 campaign, the Misa members conducted a fanatical campaign against the candidate Adrian Nastase. In this sense, I claimed and I claim that Adrian Nastase lost also because of MISA.

Did Adrian Nastase know of this “banana republic” operation, conducted as if on purpose for him to lose the elections?

I do not know.

What I know is that on March 18, 2004, the institutional forces of post-Revolution Romania showed us, for the first time ever, that they can exceed in primitivism and imbecility the institutional forces that existed under Stalin. In 2004, our supposedly independent press repeated, without any verification, all the accusations of the authorities against Gregorian Bivolaru, against Misa, without also asking the defendant.

I realize that now it is the same.

Gregorian Bivolaru is the target of violent, tendentious press campaigns, only based on the point of view of the authorities.

The right to defense!