Court Verdict Proves The Innocence Of My Teacher Grieg 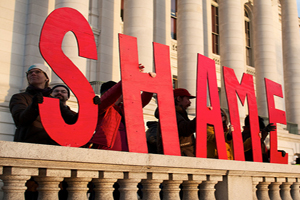 In 2004, the Romanian authorities started what the mainstream media of the time called “the largest police operation since communism”. Over 300 policemen, gendarmes and special forces raided almost 20 locations where yoga practitioners, students of MISA yoga school, were living. Truckloads of goods were confiscated; people were detained for hours at gun-point, beaten and shown in strange and misleading circumstances on TV. It was only in 2007 when the prosecution managed to come before the court with a file, accusing yoga teacher Gregorian Bivolaru (MISA yoga school’s mentor) and 20 other yoga teachers from the same school, of human trafficking. One might think that the whole thing was about some women forced to sell their bodies for the profit of some, but in reality it was the practice of the ancient system of karma yoga that was overnight turned into a crime with a very scary name in today’s almost paranoid society.

On 11th February 2015, 11 years after that unfortunate incident, the Cluj court (a large city in Romania, in the heart of Transylvania) found Mr. Gregorian Bivolaru and all the other yoga teachers not guilty. After a trial that put the life of 21 yoga teachers in a perspective that tested their yogic detachment and after a strange media campaign that endangered the life of many thousands of yoga students of the biggest yoga school in Romania, the verdict finally came: not guilty for every soul accused in the trial, beginning with Grieg.

An expected result, one could say, since the whole file was fabricated in the most pure communistic style. The “victims” were 7 people who requested many millions of euro in damages for the fact they had done voluntary work for the benefit of the yoga school. Most of them left the yoga school some years before 2004 when they were sought by the pack of desperate prosecutors, keen to show their bosses some results and get an easy promotion.

Some of these alleged victims signed declarations written by the prosecutors (as was proven during the trial) because they could not remember almost any details from their life among the other yoga practitioners. But it is not the absurdity of this file and the trial itself I want to talk about here – I am sure this will be addressed in a competent analysis from the human rights organizations – it is the court verdict I want to comment upon now. Indeed this verdict was a great victory of justice, but who are the losers?

In the verdict the judge dismisses the accusation of human trafficking as being not founded upon facts! After millions of euro have been spent on this investigation; after the authorities have thrown grave accusations against the yoga school directly through the media with complete irresponsibility; after fabricating of evidence … the file cannot make a point and the accusations are not founded upon facts??? I wonder what kind of investigation this is, what kind of justice system can reach to such a conclusion unless there are other interests behind the scenes?

Moreover, the judge dismissed some of the prosecutor’s evidence (namely phone tapping) as being illegal! Yes you read correctly, not only the prosecutor’s fabricated declarations were contradictory, but they came with illegally obtained information that did not present direct relevance to the trial, but was meant to discredit it. This shows only one thing: the case and the whole trial was only meant to be a smear campaign and not an act of justice. It is a significant fact for anyone interested in finding out the truth that such illegally obtained information was first presented in the media EVEN BEFORE IT REACHED THE FILE ON THE JUDGE’S DESK! Not only is this completely illegal but it proves without any doubt the real intention behind this circus.

As if the circus was not big enough, the reports made by the Association of Romanian Psychologists and the one made by the police’s expert in psychological profiles, psychologist Tudorel Butoi, were declared illegal! Why would a professional association make an illegal report? Was it their first attempt? For sure it was not. But somehow they lost it, they couldn’t see clearly through the maze of occult pressure, trafficking of influence and private agendas. Who would have the means to twist the hand of a national association of professionals? For sure not some small fish, it was coming from high up in the power structures, perhaps in the line of those who have at their essence the obedience attitude.

What then of the police’s profiling expert, Tudorel Butoi, whose report was dismissed by the judge as being illegal? Would it be significant if I told you that he is the same person who was used by the communist regime when they wanted to profile someone as crazy and to lock them up in a mental hospital in order to avoid a political case? Just to add some perspective, you need to know that the 2004 events were coordinated by (then) prosecutor Chaborsky, (now happily retired), an old veteran of the communist regime that politically persecuted Gregorian Bivolaru before 1989 (as proven in court in 2011 after many years of fighting with the crypto-communists that are still in the system). Same old, same old! How is it possible that nobody from the mainstream media is talking about these staggering “coincidences”, but they are serving the same propaganda machine that they are supposed to publicly expose? It is not the first time they have done this and unfortunately not the last. However, this trial and its verdict reveal another aspect: there are increasingly more people who are not willing to sell their souls to a bunch of psychopaths in power and are standing up for their humanity. This I warmly and wholeheartedly salute!

Considering all of this, the conclusion is very simple: the trial was won by Gregorian Bivolaru and the other 20 yoga teachers from MISA yoga school who patiently proved their innocence in an exaggeratedly long trial. This trial was won by a group of very dedicated lawyers who were not scared by the social pressure exerted upon them and the threats they sometimes received. It was also won by the judge who stood up to the immense moral pressure made by privately owned media and to the political interference from other circles of power.

But it was the trust of the people that was lost in this trial; the trust in a system that proves to have severe flaws and an almost generalized corruption. What can one expect from the prosecutor’s appeal to this court decision? Clearly more people’s awakening and standing up to the mistakes that this system makes – abuses done in the name of some nice words but which are in reality serving some personal interests. More people saying NO to the obedience of all colors and rites that are paralyzing the development of today’s society.

For now its celebration time, but vigilance is still required because the signs demand it still.