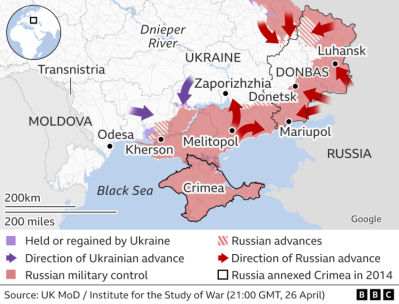 Russia continues offensive in eastern Ukraine seeking to take full control of Donetsk and Luhansk regions, and to keep a land corridor to occupied Crimea. The Russian troops conduct most intense offensive operations along the Slobozhanskyi and Donetsk axes, the General Staff of the Ukrainian Armed Forces said in a morning report on April 27.

Russia plans “referenda” to annex DNR, LNR to Russia, and to create a puppet republic in Kherson region. Russia plans to conduct false referenda in the occupied territories of Donetsk and Luhansk regions to annex both, Russian media website Meduza said. Two sources in the Russian government have even named the dates of the “referenda” – May 14 and 15. The “accession” will be within the limits “recognized” by Russia on February 21 as “historical” borders of Donetsk and Luhansk regions of Ukraine. On the same dates, Russia may conduct another “referendum” in Kherson region that is partially occupied by Russia. Russia will purportedly “put to the vote” the region’s independence from Ukraine and creation of the “Kherson People’s Republic” following a pattern of the “DNR” and “LNR”. It may also be annexed to Russia in the future, Meduza’s sources say.

Russia shut off the supply of gas to Bulgaria and Poland until they pay in rubles, Gazprom said. The move sent European gas prices up further, surging by 24 per cent. Gas futures for May delivery at TTF reached USD 1.43 per thousand cubic meters, ICE’s markets show. Bulgaria’s Minister of Energy Alexander Nikolov said gas deliveries to consumers were still guaranteed for at least a month. “It is clear that the natural gas is being used as a political weapon,” Nikolov said. “Bulgaria won’t hold negotiations under pressure. One cannot buy Bulgaria, it rejects pressure by trade partners,” the Minister proceeds.

Ukraine in Flames #48. How will the post-war reconstruction of Ukraine take place?

It will cost at least $600 billion to rebuild and reconstruct Ukraine to its pre-war capacity. The country has lost at least $100 billion in direct infrastructural damage during the first weeks of war. Ukraine’s GDP will drop by 30 to 50% in 2022. A three stage restoration plan – the U-24 Ukraine Recovery Plan – was announced by the Government of Ukraine. The first stage is ongoing: the local authorities are cleaning up and restoring the destroyed facilities temporarily. The second stage will be a quick recovery immediately after the end of hostilities. It is necessary to restore supply of water and electricity, as well as provide housing, already in 2022. The third stage, according to the plan, is a big stage of a full-fledged renewal of Ukrainian infrastructure and transport system, which will be the most costly and the longest stage. It will develop in parallel with the political process of Ukraine’s entry into the European Union. To fund the recovery plan, Ukraine will rely on international donations in the nearest future and expects to attract investments into its growing economy. Ukraine in Flames #48 will further discuss what the most urgent tasks and long term strategic priorities are in rebuilding Ukraine after the Russian aggression.