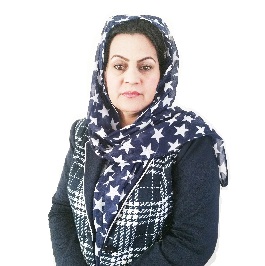 What does mean living in a country like Afghanistan where the rights of women are just nothing?

Many of you know the awful situation of Afghanistan. A country placed into the core of Asia. Object of violent turmoils since 1979 when Soviet Union decided to invade its territory. As matter of facts, Afghanistan doesn’t know the word peace. Birthplace of Talibans and al-Qaeda. To fight jihadism the western civilization is trying to export there the socalled "democracy" with scarce feedback on all stages.

In that scenary the women are the target of countless acts of violence and persecution. They don’t have to dare asking the respect of their ethic, political and social rights. The response would be only further violence. In Afghanistan women are considered as mere goods. Owing to that they’re forced to have a worrying low level of quality of life. Every day Afghan women achieved a severe battle to open closed doors.

In 2014, Nekzad was put in charge of the Independent Election Commission’s media commission, with the job of monitoring media impartiality during the Afghan presidential election campaign. Despite a climate of extreme tension, she spent several months investigating media violations of the electoral rules and complaints from the public about election coverage.

In early 2015, Nekzad has joined 59seconds, a platform that shall empower people globally to contribute news and state their opinion, with full data privacy protection, as South Asia Correspondent and Peace & Women’s Rights Ambassador. She is the recipient of a variety of awards for her work, including the 2008 CPJ International Press Freedom Award. In 2017 she founded the Center for Protection of Afghan Women Journalists.

What is the present situation of your country?

"Unfortunately in terms of security its getting worse day day specially most of rural area and some districts are still under control of Taliban, ISS Dahish” killing and explosions are even in Kabul capital of Afghanistan happening every day or every other day or weeks."

Is it possible to hope in a democratic evolution of Afghanistan?

"I am not sure as soon as till the Lows be implemented and respect by all citizen of Afghanistan equally corruption is the big issue and effect direction on progress and development of a country."

Maybe an Islamic country be democratic?

"For sure we are witness for the democracy in Islam , as we know democracy mean accept and be agree in a decision or some work or activity by majority ,, if we accept each other and satisfy another by peace mean democracy and its possible to be democratic."

Do you think that the activity of Afghan government is achieved only to obey to foreign orders?

"I think now a day the policy of Government changes in terms of order or dictated by foreign trying to show its act independently according their goal and mission. But of course not 100 %."

The situation of women in Afghanistan is awful...how to change this tragic situation?

"Exemptions from punishment are the biggest obstacle to eradicating violence against women,Whenever perpetrators of violence and mistreatment are punished, nobody will ever be allowed to commit crimes,No woman will be killed, whether by her husband, whether by force or by courtroom, I emphasize, therefore, that the implementation of the law and the elimination of the culture of impunity is the only way to eliminate this blunder of women. Also according the commitment of Afghan government in different international conferences must be followed by those counties which promised to support Afghan women and Press freedom in Afg."

What does mean to be a journalist in Afghanistan?

"It means to fight every day with all challenges, it means disclose the faces of the criminal and Sound is for the poor and the oppressed people, and those who are powerful and oppressive and inferior to the people are identified and known to the world.Be a bridge between people and government also be the voice for all to bring positive change by support of International Community."

You wish to create a center to protect Afghan women journalists, why?

"Women have had many problems and challenges, especially female journalists complain of gender-based harassment in the workplace and complaints of discrimination Women’s reporters face a double clash of low salaries and high labor.Now creating this center( Center for Protection of Afghan Women Journalists “CPAWJ” is a welcome message for women journalists and a specific address to say and share issues that cannot be shared with their family or their media owners. By creating this center along with the support of journalist women, in cooperation with the Organization of Reporters Without Borders, we are working to increase the level of their professional capacity and to partner with the decision makers to eliminate violence and discrimination, and appreciate their work and courage."

How do you face a society so contrary to women and journalists?

"In fact, this is not an easy task unless you want to be in a country where more than four decades of war continues and patriarchal traditions still dominate, for the sake of positive change, and the media are the only way to raise awareness for the people, especially those who are not literate or poorly educated. It was informed in different ways and in different ways that, in this age, they would recognize their rights and others and respect women and respect their fundamental rights. Most importantly, women must be pioneered and campaigned in order to obtain their salaries and privileges so that they will not be victims of violence or other prejudices for the next generation, and it will still support the support of the government and the international community if they are not pressurized by the Afghan government. Their commitments are not loyal and women have always been marginalized."

Do you think foreign people are aware about all that?

"Yes, they are neither blind nor unhappy in modern times, and new technology is aware of all the issues through a variety of issues, but unfortunately sometimes they are silenced, especially as human rights violations, as if they have not been heard or seen. Afghan women, especially journalists from the international community, especially those committed to protecting women’s rights and freedom of expression, have high expectations and they should not leave women alone in such a situation, because in the decade of democracy, the role and presence of women can be praised and this has gained. Women’s efforts and struggles are supported by the international community and they should not be able to easily overcome this achievement."

What can we do to help democratic Afghan people to create a more wide society?

"As countries committed to protecting human rights, especially women’s rights, peace and democracy and the fight against corruption, I must say that Afghanistan should be prosecuted through programs and projects, and do not allow violations or violations in this regard. Human rights are violated, especially in the election, women’s role should be more strongly supported and the transparency of the election process given priority. Freedom of expression is still one of the values that the government should support and the hard-liners should not threaten journalists. Female journalists still need financial and spiritual support. They need to be given serious attention to their needs. Sexual abuse of children is trafficked. All this can play a role in good socialization and governance, and it can help you."

What is your overview about the future of your country?

"If the national unity government decisively prioritizes issues of importance to the state level, they will not go beyond internal conflicts. Perhaps over the next two years, we will see some positive changes in some sectors, but they will not act honestly, they will not witness peace, nor will they witness the end of the war. Accordingly, we can cover the increasing insecurity of suicide and explosion more than today and tomorrow and the dark space everywhere, and this opportunity may be beneficial to the Taliban and the opposition groups, which is why the concern of the people, especially women and journalists, is due to the deal or destruction. The achieved values and achievements will be more serious and serious."

Site of Center for Protection of Afghan Women Journalists:

The cover photo was sent by Farida Nekzad