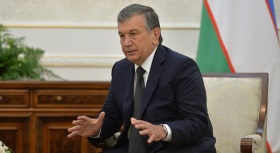 Bishkek (AKIpress) - Shavkat Mirziyoyev won the historic presidential vote on Sunday by a landslide, according to the Uzbekistan Central Election Commission.

Mirziyoyev, 59, former Uzbek Prime Minister, who was named interim president after the death of Islam Karimov of stroke on September 2, won 88.61 percent of the votes or 15.9 million people voted for him, Central Election Commission head Mirza-Ulugbek Abdusalomov told a news briefing.

By Uzbek law, Speaker of the Senate was supposed to become the interim president after the death of Karimov. But he opted out in favour of Mirziyoyev, who was appointed the head of the committee organizing Karimov’s funeral.

Mirziyoyev was born on July 24, 1957 in a doctor’s family from the Jizzakh region. He is a Tashkent Institute of Irrigation and Melioration graduate who studied engineering; holds a PhD degree in technological sciences.

In 1995-2003, Mirziyoyev was a member of the Oliy Majlis, the bicameral parliament of Uzbekistan.

Mirziyoyev was awarded the Order of Labor Glory (Mekhnat Shukhrati) and the Order for Selfless Service (Fidokorona Khizmatlari Uchun). He is married and has 3 children (two daughters and a son).

CREDITS: The cover photo is taken from the original article