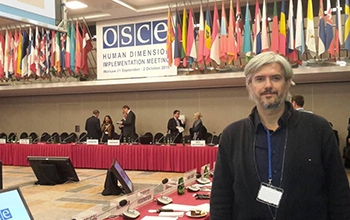 However, the idea evolved and led to new meanings and perspectives upon what is one of the most trendy topics today. It is still used to justify invasions, tyranny, discrimination, deformation of history, and economical interests. Nowadays, the influence of non-physical factors becomes often more powerful than physical action. We can induce a state of mental illness in a person just by social media bullying; we can ruin the health of a group of people by keeping them in a constant state of stress or fear. We can destroy the life of a person by destroying his reputation. There are several abuses against human rights without any physical aggression or exterior signs which can be forensically proved.

And the most impoverished segment of human life in terms of human rights is by far the spiritual life/practice. The use of mass media in combination with the network of anti-sect organisations (discreetly and illegally sponsored by different governments), has become a modern form of inquisition that can severely violate a person’s basic rights and represents a threat to the health of many individuals and of society. They can create stronger tools of pressure against groups and individuals than the police and army exerted in the years after the 1948 UN declaration on human rights.

Anti-sect movements, like FECRIS (and its affiliates), have become in many cases the social refuge for sociopaths, anarchists without cause, and even fanatics and extremists. Proof of this can be seen in the increased number of lawsuits in which they were accused of hate crimes, defamation and harassment and that they have lost in court – more cases than any other organised group in Europe. This alone tells a lot about this real social threat.

Because spiritual practice often results in profound transformations of one’s inner point of view and transformation of inner attitudes and choices, which give rise to a higher degree of freedom and unpredictability, it is regarded by a rather rigid social system as a threat and almost automatically pushed out of society. This is fundamentally one of the main sources of human rights abuses based on spiritual practice. And organisations such as the anti-sect ones become the normal byproduct of this unnatural antagonism between the materialistic goals of most societies and the spiritual wellbeing of humans that transcend (yet include) material existence. When we look upon improving human rights in the world, we must also look to solve this apparent contradiction that generates abnormalities such as the ones mentioned above.

Today I was invited by Soteria International to attend the OSCE Human Dimension Implementation Meeting (in Warsaw, Poland) and to talk with some delegates about the MISA (Romania) case and the human dimension of Gregorian Bivolaru’s ongoing international case. As usual, I find here a fascinating variety of topics that call for more attention, especially in the increasing field of Freedom of Religion and Belief (the OSCE session that is taking place now…). And they all revolve around the same central axis.

If I look back to the first time when i participated to such an event in 2007, it is clear there is an increased awareness about the need to reconsider human rights from the perspective of spiritual principles in order to create a solid foundation for human rights in our times and eliminate the antagonism with the social power.

When i started to be more interested on this topic and wrote Toward A Revised Version Of The Universal Declaration Of Human Rights as a foundation of the notion of spiritual human rights, there was very little awareness in the OSCE circles about this perspective. Today this awareness is increasing with more problems that appear from the idea of religious freedom and the human rights that are connected with this. I can also see the increased radicalisation of those who want to eliminate any spiritual dimension from the talks on human rights in order to make it “more objective and simple to implement”. Unfortunately this tendency is usually motivated by the desire to keep the new methods of controlling and manipulating individuals free from any human rights obligations. There are many who openly reject the spiritual dimension in human rights talks in order to bring all religions and spiritual groups to a minimum common denominator … but this Procrustean approach has always been proven wrong and only serving as a good entry for those who use it as an excuse to install and maintain oppressive systems that do not rely on any physical action.

This situation calls for increased vigilance and resolution in taking human rights to meet the real needs of human beings of the 21st century. In this respect, the work of Soteria International starts to become even more relevant. I am happy to be of help in this field and hope more people who are interested in spirituality will understand the importance of getting involved now when there is a new horizon emerging.