Pros and cons of Brexit

The British people have voted to leave the European Union after a historic referendum in which they rejected the advice of the main Westminster party leaders and instead took a plunge into the political unknown. 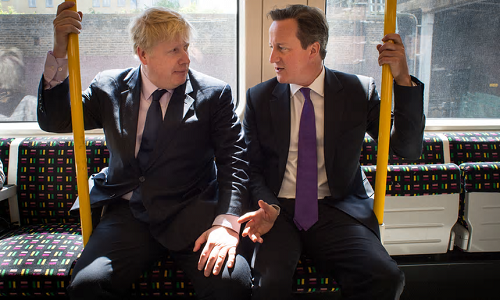 The decision in favour of Brexit, following a bitterly close electoral race, represents the biggest shock to the political establishment in Britain and across Europe for decades, and will threaten the leaderships of both the prime minister, David Cameron, and the Labour leader, Jeremy Corbyn.

The value of the pound swung wildly on currency markets as initial confidence among investors expecting a remain vote was dented by some of the early referendum results, triggering falls of close to 10% and its biggest one day fall ever. Jeremy Cook, chief economist and head of currency strategy at WorldFirst, said: “Sterling has collapsed … It can go a lot further as well.”

By 4am, a series of key results signposted a likely leave victory. After a lower-than-expected margin of victory for the remain campaign in Newcastle, where it won the backing of 54% of voters, there was a jolt after midnight when leave captured Sunderland with 61.3% of the vote in a city which has traditionally been a Labour stronghold.

The pound has fallen to levels not seen since 1985.

The day the world changed: Britain WILL leave the EU after voters trigger a political earthquake by backing Brexit - sparking panic in the markets and effectively ending David Cameron’s time as PM

Britain has been hit by a political earthquake after the historic EU referendum delivered clear backing for Brexit - and effectively ended David Cameron’s career. 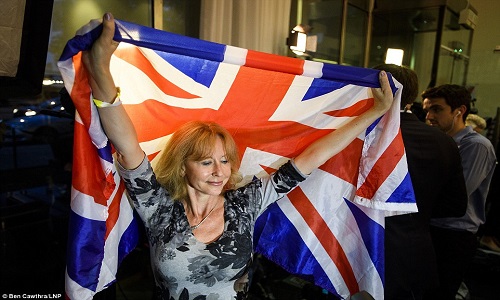 The Leave campaign triumphed after stacking up votes across England and Wales - despite massive support for Remain in Scotland and major cities including London.

The Prime Minister is expected to give his response to the dramatic verdict shortly, with speculation that he will herald the end of his tenure in Downing Street. Ukip leader Nigel Farage has hailed a ’victory for real people’ and declared June 23 the country’s ’Independence Day’.

The Pound nose-dived to its lowest level against the US dollar for 31 years as traders took fright at the news, and the stock market is set to open down around 8 per cent. SNP leader Nicola Sturgeon has already raised the prospect of a second independence referendum in Scotland.

Labour leader Jeremy Corbyn is also coming under intense pressure over his role in the botched Remain campaign.

The direction of the battle started to become clear with a shock result in Sunderland which saw the Out camp win by 61 per cent to 39 per cent. Analysis before the referendum had suggested Leave could be on track to win if they were more than six percentage points ahead.

A surprise victory for Brexit in Swansea, where the pro-EU side had been expecting to romp home, signposted a disastrous showing for Remain across Wales. Areas like Carmarthenshire decisively turned their back on Brussels.

Newcastle was less clear cut for the pro-EU side than they had hoped, seeing them sneak home by just 51 per cent to 49 per cent.

Remain had some bright spots, with chunky wins in London, Scotland and Oxford. Wandsworth in particular piled in with a massive 77 per cent in favour of staying.

However, the English cities and Scotland were not enough to offset the will of the rest of the country, and Leave passed the finishing post at 6am.

Speaking at a jubilant Leave.EU rally in central London, Mr Farage said June 23 would go down in history as ’our independence day’.

In a remark that could prove controversial after Labour MP Jo Cox was shot dead last week, Mr Farage said the country was separating from the EU ’without a single bullet being fired’ .

’Dare to dream that the dawn is breaking on an independent United Kingdom,’ he said.

’And today honesty, decency and belief in nation, I think now is going to win.

’And we will have done it without having to fight, without a single bullet being fired, we’d have done it by damned hard work on the ground.’

Mr Farage praised Ukip donor Arron Banks along with Labour and Tory MPs and those of ’no party’ who have taken part in the Leave campaign.

’I hope this victory brings down this failed project and leads us to a Europe of sovereign nation states, trading together, being friends together, cooperating together, and let’s get rid of the flag, the anthem, Brussels, and all that has gone wrong.

’Let June 23 go down in our history as our independence day.’

Setting the stage for another independence referendum north of the border, Scottish First minister Nicola Sturgeon said: ’Scotland has delivered a strong, unequivocal vote to remain in the EU, and I welcome that endorsement of our European status.

’And while the overall result remains to be declared, the vote here makes clear that the people of Scotland see their future as part of the European Union.’

The SNP leader added: ’Scotland has contributed significantly to the Remain vote across the UK. That reflects the positive campaign the SNP fought, which highlighted the gains and benefits of our EU membership, and people across Scotland have responded to that positive message.

’We await the final UK-wide result, but Scotland has spoken - and spoken decisively.’

Former first minister Alex Salmond told the BBC: ’Scotland looks like it is going to vote solidly Remain. If there was a Leave vote in England, dragging us out the EU, I’m quite certain Nicola Sturgeon would implement the SNP manifesto.’

Shadow foreign secretary Hilary Benn told the BBC he did not think the PM was ’going to remain in his job for very long at all’.

’If you are the Prime Minister, you’ve called this referendum, you’ve laid your reputation on the line and your arguments, I think it’s going to be very hard.’

Former Europe minister and Labour MP Keith Vaz told the BBC the outcome would be a ’catastrophe’. ’Frankly, in a thousand years I would never have believed that the British people would have voted this way,’ he said.

’And they have done so and I think that they voted emotionally rather than looking at the facts.

’It’ll be catastrophic for our country, for the rest of Europe and indeed the world.’

He added: ’The issues of immigration are extremely important, if you look at the campaign I think that there needed to be a much stronger campaign to stay in.’

Labour’s Jonathan Ashworth said the Conservative Party was ’utterly preoccupied with leadership infighting rather than the future of the country’, adding: ’This letter cannot unsay what senior Tory politicians have been telling us for weeks - that the British people simply cannot trust David Cameron.’