The convergence of new energy and communications regimes: a challenge for our future? 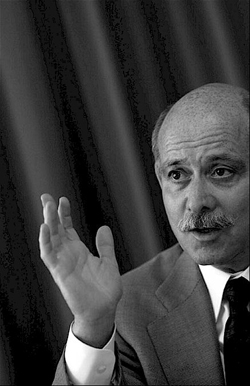 Who is Jeremy Rifkin?

Jeremy Rifkin is president of the Foundation on Economic Trends and the author of seventeen best-selling books on the impact of scientific, technological, and cultural changes on the economy, the workforce, society, and the environment. His books have been translated into more than thirty languages and are used in hundreds of universities, corporations and government agencies around the world. His most recent books include The Hydrogen Economy, The European Dream, The End of Work, The Age of Access, and The Biotech Century.

Mr. Rifkin has served as a senior consultant to the two previous Presidents of the Council of Europe, Prime Minister Jose Socrates of Portugal and Chancellor Angela Merkel of Germany, on issues related to the economy, climate change, and energy security. He also serves as an advisor to President Jose Manuel Barroso of the European Commission, the European Parliament, and several EU heads of state, including President Jose Rodriguez Zapatero of Spain and Prime Minister Romano Prodi of Italy.

Rifkin has been influential in shaping public policy in the United States and around the world. He has testified before numerous congressional committees and has had consistent success in litigation to ensure responsible government policies on a variety of environmental, scientific and technology related issues. He has been a frequent guest on numerous television programs, including Face the Nation, The Lehrer News Hour, 20/20, Larry King Live, Today, and Good Morning America. The National Journal named Rifkin as one of 150 people in the U.S. that have the most influence in shaping federal government policy.

Mr. Rifkin has been a fellow at the Wharton School’s Executive Education Program since 1994, where he lectures to CEOs and senior corporate management from around the world on new trends in science and technology and their impacts on the global economy, society and the environment.

Mr. Rifkin’s monthly column on global issues appears in many of the world’s leading newspapers and magazines, including The Los Angeles Times in the United States The Guardian in the U.K., Die Süddeutsche Zeitung and Handelsblatt in Germany, Le Soir and Knack in Belgium, L’Espresso in Italy, El País in Spain, Informatíon in Denmark, De Volkskrant in the Netherlands, Hospodárské Noviny in the Czech Republic, Wort in Luxembourg, Eesti Päevaleht in Estonia, Trud in Bulgaria, Clarín in Argentina, and Al-Ittihad in the U.A.E.

Mr. Rifkin holds a degree in economics from the Wharton School of the University of Pennsylvania, and a degree in international affairs from the Fletcher School of Law and Diplomacy at Tufts University. Rifkin speaks frequently before government, business, labor and civic forums. He has lectured at hundreds of the world’s leading corporations as well as more than 200 universities in some 30 countries in the past 30 years.

Mr. Rifkin is the founder and president of The Foundation on Economic Trends (www.foet.org) in Washington, DC. The Foundation examines the economic, environmental, social and cultural impacts of new technologies introduced into the global economy.

Leading the Way to the Third Industrial Revolution: A New Energy Agenda for the European Union in the 21st Century - The Next Phase of European Integration -

We are approaching the sunset of the oil era in the first half of the 21st century. The price of oil on global markets continues to climb and peak global oil is within sight in the coming decades. At the same time, the dramatic rise in carbon dioxide emissions from the burning of fossil fuels is raising the earth’s temperature and threatening an unprecedented change in the chemistry of the planet and global climate, with ominous consequences for the future of human civilization and the ecosystems of the earth.

While oil, coal, and natural gas will continue to provide a substantial portion of the world’s and the European Union’s energy well into the 21st century, there is a growing consensus that we are entering a twilight period where the full costs of our fossil fuel addiction is beginning to act as a drag on the world economy. During this twilight era, the 27 EU member states are making every effort to ensure that the remaining stock of fossil fuels is used more efficiently and are experimenting with clean energy technologies to limit carbon dioxide emissions in the burning of conventional fuels.

These efforts fall in line with the EU mandate that the member states increase energy efficiency 20 percent by 2020 and reduce their global warming emissions 20 percent (based on 1990 levels), again by 2020. But, greater efficiencies and mandated global warming gas reductions, by themselves, are not enough to adequately address the unprecedented crisis of global warming and global peak oil and gas production. Looking to the future, every government will need to explore new energy paths and establish new economic models with the goal of achieving as close to zero carbon emissions as possible.

THE GREAT ECONOMIC REVOLUTIONS IN HISTORY: THE CONVERGENCE OF NEW ENERGY AND COMMUNICATIONS REGIMES

The great pivotal economic changes in world history have occurred when new energy regimes converge with new communication regimes. When that convergence happens, society is restructured in wholly new ways. In the early modern era, the coming together of coal powered steam technology and the print press gave birth to the first industrial revolution. It would have been impossible to organize the dramatic increase in the pace, speed, flow, density, and connectivity of economic activity made possible by the coal fired steam engine using the older codex and oral forms of communication. In the late nineteenth century and throughout the first two thirds of the twentieth century, first generation electrical forms of communication—the telegraph, telephone, radio, television, electric typewriters, calculators, etc.—converged with the introduction of oil and the internal combustion engine, becoming the communications command and control mechanism for organizing and marketing the second industrial revolution.

A great communications revolution occurred in the 1990’s. Second generation electrical forms of communication—personal computers, the internet, the World Wide Web, and wireless communication technologies—connected the central nervous system of more than a billion people on Earth at the speed of light. And, although the new software and communication revolutions have begun to increase productivity in every industry, their true potential is yet to be fully realized. That potential lies in their convergence with renewable energy, partially stored in the form of hydrogen, to create the first “distributed” energy regimes.

The same design principles and smart technologies that made possible the internet, and vast distributed global communication networks, will be used to reconfigure the world’s power grids so that people can produce renewable energy and share it peer-to-peer, just like they now produce and share information, creating a new, decentralized form of energy use. We need to envision a future in which millions of individual players can collect, produce and store locally generated renewable energy in their homes, offices, factories, and vehicles, and share their power generation with each other across a Europe-wide intelligent intergrid. (Hydrogen is a universal storage medium for intermittent renewable energies, just as digital is a universal storage mechanism for text, audio, video, data and other forms of media)

The question is often asked as to whether renewable energy, in the long run, can provide enough power to run a national or global economy? Just as second generation information systems grid technologies allow businesses to connect thousands of desktop computers, creating far more distributed computing power than even the most powerful centralized computers that exist, millions of local producers of renewable energy, using hydrogen storage and intelligent utility networks, can potentially produce far more distributed power than the older centralized forms of energy – oil, coal, natural gas and nuclear – that we currently rely on.

The creation of a renewable energy regime, partially stored in the form of hydrogen, and distributed via smart intergrids, opens the door to a Third Industrial Revolution and should have as powerful an economic multiplier effect in the 21st century as the convergence of mass print technology with coal and steam power technology in the 19th century, and the coming together of electrical forms of communication with oil and the internal combustion engine in the 20th century.

European industry has the scientific, technological, and financial know-how to spearhead the shift to renewable energies, a hydrogen economy, and an intelligent power grid and, by so doing, lead the world into a new economic era. Europe’s world class automotive industry, chemical industry, engineering industry, construction industry, software, computer and communication industries, and banking and insurance industries, give it a leg up in the race to the Third Industrial Revolution.

By fostering renewable energies, a hydrogen infrastructure, and a continent-wide intelligent intergrid, the European Union can help create a sustainable economic development plan for its 500 million citizens in the first half of the 21st century.

The Third Industrial Revolution will require a wholesale reconfiguration of the transport, construction, and electricity sectors, creating new goods and services, spawning new businesses, and providing millions of new job.

Being first to market will position the European Union as a leader in the Third Industrial Revolution, giving it the commercial edge in the export of green technological know-how and equipment around the world. Producing a new generation of renewable energy technologies, manufacturing portable and stationary fuel cells, reinventing the automobile, redesigning Europe’s buildings and aging infrastructure using green architectural best practices, reconfiguring the electrical power grid, as well as producing all of the accompanying technologies, goods and services that make up a high-tech Third Industrial Revolution economy, will have an economic multiplier effect that stretches well toward the mid decades of the 21st century.

The coming together of distributed communication technologies and distributed renewable energies via an open access, intelligent power grid, represents “power to the people”. For a younger generation that’s growing up in a less hierarchical and more networked world, the ability to produce and share their own energy, like they produce and share their own information, in an open access intergrid, will seem both natural and commonplace.

You can read an extesive Italian version of above synopsis by checking the attached document titled "Terza rivoluzione industriale".