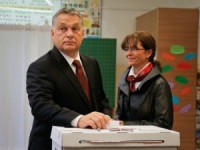 The referendum on Sunday in Hungary on EU migrant quotas failed to reach the necessary threshold of 50 per cent support by a margin of 7 per cent.

However, more than 98 per cent of those who did cast ballots voted “No” to accepting Hungary’s allocated share of migrants - and Prime Minister Viktor Orban - who initiated the vote - has announced that he will amend the constitution so that referendum becomes valid.

He also added expects that the Hungarian referendum will boost similar moves in other countries. “We are proud that we are the first,” Orban stated on Sunday.

However, nearby Balkan EU states are seen as unlikely to take the same path, experts say.

Viktor Koska, deputy director at the Zagreb Center for the Study of Ethnicity, Citizenship and Migration, CEDIM, told BIRN that predictions of the likely effect of the Hungarian referendum on the region “can’t be given unambiguously”.

But he warned of a potential “spill-over effect” in terms of a rise in nationalist anti-migrant rhetoric. The radical rhetoric used in Hungary, based “on a myth of defending Western Christian civilisation from Islamic intruders”, is strengthening the far right in the region and all over Europe, he said.

“The more this policy lasts, the bigger the platform for the far right will be in other countries and this is a potential risk,” he said.

The Hungarian referendum has given a tool for the right in other states to oppose EU policies on migrants, while the EU also lacks “mechanisms to ensure its policies are implemented”, he added.

The EU quota system adopted in September 2015 aimed to resettle and reallocate 160,000 non-European asylum-seekers from Italy and Greece to other EU states by September 2017.

The quota system is widely seen as having failed. According to Commission records, while Romania had received 202 migrants by last week, Bulgaria and Croatia had received only six and 14 respectively. Hungary has received none.

Unlike Hungary, where supporters of Prime Minister Viktor Orban hold almost two-thirds of seats in parliament, Croatia is still in talks on forming a new coalition government.

Andrej Plenkovic, head of the main centre-right party, the Croatian Democratic Union, HDZ, is likely to emerge as the new prime minister.

But since Plenkovic is an MEP with a long career in diplomacy, he is expected to support EU policies.

Koska notes that, unlike the last HDZ-led government, which was keen to restrict migration, it is “still unknown how Plenkovic will deal with future challenges”.

Nevertheless, Koska said Plenkovic “looks like a responsible politician who would rather listen to Brussels than to Budapest.

“I don’t believe Plenkovic would be willing to risk his relations with Brussels and Berlin to get closer to Budapest and the far right,” Koska concluded.