By Matea Gold and David A. Fahrenthold (The Washington Post)

Donald Trump held a strong advantage in the presidential race after midnight on Wednesday, as the Republican neared a historic upset with victories across a string of states where Democrat Hillary Clinton had been expected to win. 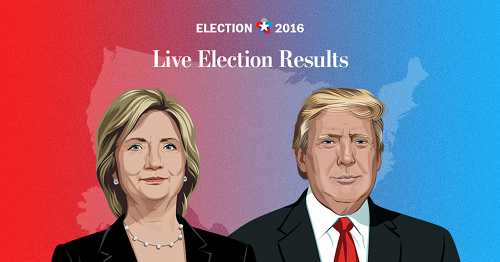 Trump had been projected as the winner in Ohio, Florida, Iowa and North Carolina, leaving Clinton in the bad position where Trump seemed to have started the day. She needed to win a string of close states, where polls remained too close to call, to vault back into the race for 270 electoral votes.

The states still un-called, whose fate would decide the election, were New Hampshire, Minnesota, Arizona, Alaska, Wisconsin, Michigan and Pennsylvania.

Trump was on track to prevail in Ohio, a key bellwether state that has backed the losing presidential candidate only once since 1944. The GOP nominee appealed directly to the sense of economic grievance in the Buckeye State, which has been buffeted by a declining manufacturing industry. Locking up the state’s 18 electoral votes boosts his options to getting to 270 electoral votes.

The GOP nominee was also projected as the winner in Florida, another key state, where Clinton had felt confident that a surge in Latino voters would win her the state.

Trump was also the likely winner in the fiercely contested battleground state of North Carolina. That put the Tar Heel State and its 15 electoral votes back in the Republican column — securing one of the pivotal states that Trump needs for victory. This is the second presidential campaign in a row that North Carolina has gone red, despite a furious effort by Clinton and President Obama to turn out Democratic voters there.

Republicans also kept control of the Senate, according to the Associated Press’s projections. After 1:15 a.m., the AP predicted that Sen. Pat Toomey would be reelected in Pennsylvania, guaranteeing the GOP more than 51 seats. Earlier in the night, Republican incumbents had held on to their seats in Florida and Wisconsin.

Even Trump supporters were stunned by the direction of the race.

Austin Daily, a 20-year old college student from Troy, N.Y., stood in front of the White House in shock late Tuesday. He came to the White House Tuesday in a blazer and tie prepared to protest a Clinton victory. Now he was getting ready to celebrate.

Clinton was projected the winner in Virginia, putting the state’s 13 electoral votes in her column. The late call came after a surprisingly tight contest in the commonwealth, whose blue northern suburbs outside of Washington, D.C. were anticipated to give her a substantial edge. With her victory, Virginia has now gone Democratic for three presidential elections in a row.

Voting also ended in the key swing states of Arizona, Georgia, Michigan, Nevada, New Hampshire, Pennsylvania, Utah, and Wisconsin. But those pivotal states were too close to immediately call.

Excitement was building inside Trump’s party late Tuesday night at a hotel ballroom a few blocks from Trump Tower. Supporters high-fived each other and excitedly checked their smartphones as the results poured in and Trump’s chances of an upset appeared brighter.

“It’s Florida!” exclaimed Richard Lucy, a 57-year-old investor from New York City, as Fox News called the Sunshine State just before 11 p.m. He leapt up from his seat to cheer the result.

“If we win Pennsylvania, Wisconsin, Michigan and Minnesota, this place is going to go crazy,” added an excited Lucy, who wore a red “Make America Great Again” hat.

A chant of “Drain the swamp!” broke out a few minutes earlier, when Fox news called North Carolina for the GOP nominee.

At 1 a.m. Clinton remained at the Peninsula Hotel, about a mile from the Javits Center, with Bill Clinton and longtime aide and confidante Cheryl Mills. Other top aides had moved to a roped-off room at the Javits Center as it appeared increasingly likely that Clinton would deliver a concession speech.

A party atmosphere in Clinton’s election night headquarters at the Javits Center in Manhattan began to darken mid-evening. When Trump took Ohio, even though his victory there had been predicted, a nervous current passed around the room.

Top Clinton aides who had circulated among the press risers had long since disappeared. The only Clinton campaign staff in evidence as the 11 o’clock hour approached were fairly junior press aides, and they looked nervous and uncertain.

Senior advisers were not answering their phones.

A trickle of supporters began streaming out of the Javitz Center as the hour approached midnight. Most looked stricken by the realization that the night might not end for Clinton on a jubilant note.

Julia Beatty, 38, began walking down the stairs toward the exit with her Clinton sticker peeling off of her leather jacket.

“I’m actually speechless right now,” Beatty said. “I just want to make it safely uptown so I can sob into a glass of wine.”

By 12:30 a.m. the streams of people leaving the hall passed supporters hugging and crying.

One woman in a grey Hillary t-shirt stumbled past a barricade and toward the door with tears wetting her jacket. She shook her head no when asked whether she would stop to talk about her disappointment. She made no attempt to wipe away the tears.

Clinton’s growing confidence that she would win had been evident in campaign appearances in recent days, as she appeared relaxed and happy during a whirl of rallies in Florida, North Carolina, Pennsylvania, Ohio and Michigan.

At the same time, she and her campaign aides preached the importance of turning out the vote in those crucial states, warning that staying home could mean the difference between winning and losing.