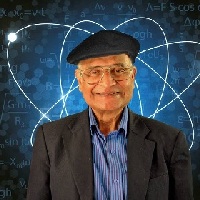 What do we mean by materialist science? Materialist science takes it as its basic axiom that everything is matter. We have literally managed to train a whole generation of students on the idea that everything is material, but this Newtonian world view that has shaped our understanding for centuries is now giving way to the revelations of quantum physics which goes beyond materialism; to show that consciousness, not matter, is the ground of all being.

You can call it God if you want, but you don’t have to. Quantum consciousness will do. Nonlocality, tangled hierarchy, and discontinuity: these signatures of quantum consciousness have been independently verified by leading researchers worldwide. This experimental data and its conclusions inform us that it is the mistaken materialist view that is at the center of most of our worlds problems today. To address these problems, we now have a science of spirituality that is fully verifiable and objective.

Goswami has written several other popular books based on his research on quantum physics and consciousness. In The Visionary Window, he demonstrated how science and spirituality could be integrated. In Physics of the Soul, he developed a theory of survival after death and reincarnation. In The Quantum Doctor, Goswami sought to integrate both conventional and alternative medicine.

In Creative Evolution, Goswami presented a resolution between Darwinism and the intelligent design of life. In God is Not Dead, he asserted that not only are science and religion compatible but that quantum physics proves the existence of God. In Quantum Creativity: Think Quantum, Be Creative, Goswami explained all facets of creativity—its definition, the quantum thinking it entails, and what is required to be creative. In Quantum Economics: Unleashing the Power of an Economics of Consciousness, he focused on critical issues for a new paradigm in economics and business for the twenty-first century, touching upon the stability and sustainability of the economy and leadership, as well as creativity and ethics in business.

In his most recent book, The Everything Answer Book (April 2017), Goswami’s basic premise is that quantum physics is not only the future of science, but it is also the key to understanding consciousness, death, God, psychology, and the meaning of life. In short, quantum physics offers a theory of everything.

In his private life Goswami is a practitioner of spirituality and transformation. He calls himself a quantum activist. He appeared in the film What the Bleep Do We Know!? and its sequel Down the Rabbit Hole as well as the documentaries Dalai Lama Renaissance and the award winning The Quantum Activist.

Quantum Activism is the idea of changing ourselves and our societies in accordance with the principles of quantum physics.

:.: Documenti allegati
There is a revolution going on in science