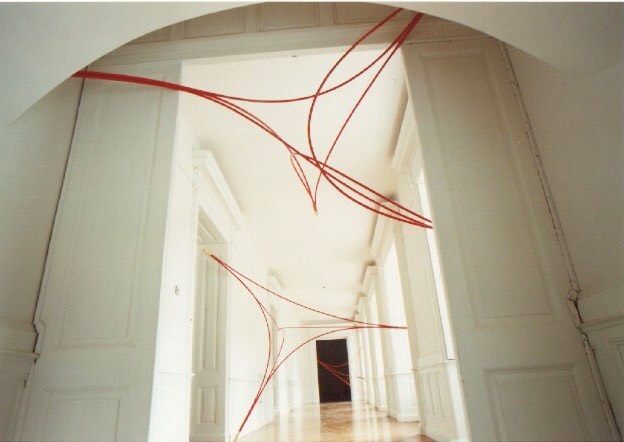 The Associazione Culturale Teatro Pratiko, in collaboration with the Centro Culturale Trevi - la piazza della cultura, is proud to present part one of the project Munari - In Movement, curated by Miroslava Hajek and Manuel Canelles. The project is supported by the Provincia autonoma di Bolzano - Alto Adige - Ripartizione Cultura Italiana.

Thanks to the courtesy of the curator Miroslava Hajek, the February exhibition presents a selection of works by Bruno Munari: the flexible structure machines and experimental cinema.

Munari’s historic FLEXY are ‘useless’ flexible objects created in the 1960s as a work of interactive art, that change form without changing size. They are presented at the Centro Trevi in large plastic versions with a dynamic and manipulable form; they have no up or down, no front or back, no right or left. In his Codice Ovvio (Obvious Code) Munari himself claims: "Flexy is silent / Flexy is here to play”.

Also on display is the CONCAVO CONVESSO (CONCAVE CONVEX) series, made from simple industrial fine metal mesh. The object’s transparency is emphasised by punctiform lights aimed at it to construct shifting shadows, reverberations and abstract patterns similar to small short films on the walls of the room. Munari conceived of the installation as the proper balance between design (of architecture, light, morphology of the object) and the casual refractions of shadows. Concavo-Convesso is simultaneously programmed and random.

As Miroslava Hajek writes in the issue n. 12 of Moussemagazine: “Immersed in darkness, illuminated only by a few red spotlights, Concavo-convesso transports the visitor into an aesthetic environment of mobile architecture. Indeed, we must not forget that Concavo-Convesso is unimaginable or unusable when disconnected from a space that forces the viewer to partake in a total sensory and emotional experience. The object vibrates with optical effects, yet its shadow, by filling the space around it and creating parallel effects, possibly becomes more important and triggers an emotional reaction in the viewer that the object alone is unable to transmit”.

In July 2020, phase two of the project will present a specific group of works: the Fixed Light Projections and Polarised Light Projections, created during the 1950s. They represent the completion of the artist’s research intent on capturing a new spatiality beyond the two-dimensional reality of the work of art. The Projections belong to a line of thinking with two important objectives: dematerialising the canvas by creating environments of light, and offering the spectator an abundance of no longer static images. The Direct Projections, first created in 1950 using different materials inserted in small glass slide frames, are directly related to the works of the Bauhaus: “They are not colour photographs, but direct projections of materials”, Munari made clear. The Direct Projections, single or multiple, are the first step in a research that led Munari, initially to the Continuous Focus Projections, in with material emerges from the glass slide, creating different images as they move in and out of focus. Finally, the Polarised Light Projections were entirely unique to the field of cromo-kinetic research. The effect of Polaroid film becomes visible when this colourless material is sandwiched between two glass slides; in particular, the rotating movement of the slide closest to the viewer creates a virtual movement of the composition created by Munari. He designed projections by rotating polarising filters in front of the projector lens and lightboxes, with and without a motor, which he named the Polariscop.

This unique and exceptional body of work was assembled and made accessible thanks to the authority of Miroslava Hajek, in the wake of a process of digitalisation. The works were collected, studied and conserved by Hajek, an internationally recognised art historian, curator and gallery owner, in response to a proposal by Munari himself. He sought a critical analysis of his artistic work, which he used this to create a catalogue raisonné, chronologically structured and capable of describing the parabola of his creative development.

Beginning with phase one of the exhibition in February, the Centro Trevi piazza delle cultura will become the hinge point for a series of workshops and a network of collaborationsinvolving a vaster territory: workshops and performances will involve various partners in a process of communication transiting between different languages of expression. This work in progress will consist of actions and projections extending out into the closed and open spaces of the city, into “another” space in which bodies, gestures, music and multimedia projections can dialogue with one another and create different levels of sensory and visual perception. Curated by the Gruppo immagine – associazione per la ricerca sullo sviluppo del pensiero divergente in età evolutiva, inaugurated by Bruno Munari in 1986 – workshops for the development of divergent thinking will be offered to schools, educators and teachers. The project will also activate collaborations with associations, organisations and institutions, arrange for presentations at universities, art galleries and museums and involve the local community in actions of mediation and networking.

Munari - In Movimento In Movement