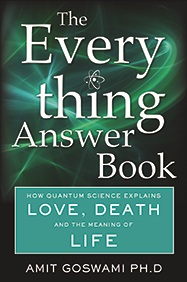 The new book of Dr. Amit Goswami out on April 2017

Here in 17 chapters, Dr. Goswami and his friends and colleagues discuss, among other things, how quantum physics affects our understanding of:

• God’s will, evolution, and purpose

• The meaning of dreams

• The spiritualization of economics and business, politics and education, and society itself.

This fascinating new book will appeal to a wide array of readers, ranging from those interested in the new physics to those captivated by the spiritual implications of the latest scientific breakthroughs.

Goswami has written several other popular books based on his research on quantum physics and consciousness. In The Visionary Window, he demonstrates how science and spirituality can be integrated. In Physics of the Soul, Goswami develops a theory of survival after death and reincarnation. In The Quantum Doctor, Goswami seeks to integrate both conventional and alternative medicine. In Creative Evolution, Goswami presents a resolution between Darwinism and the intelligent design of life. In God is Not Dead, Goswami demonstrates that not only are science and religion compatible but that quantum physics proves the existence of God. In Quantum Creativity: Think Quantum, Be Creative, Goswami explains all facets of creativity—its definition, the quantum thinking it entails, and what is required to be creative.

In Quantum Economics: Unleashing the Power of an Economics of Consciousness (May 2015), Goswami focuses on critical issues for a new paradigm in economics and business for the twenty-first century touching upon the stability and sustainability of the economy and leadership as well as creativity and ethics in business.

In his private life, Goswami is a practitioner of spirituality and transformation. He calls himself a quantum activist. He appeared in the film “What the Bleep Do We Know!?” and its sequel “Down the Rabbit Hole” as well as the documentaries “Dalai Lama Renaissance” and the award winning “The Quantum Activist.”