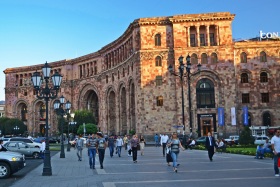 Sent by prof. Stepan Grigoryan Chairman of the Board at ACGRC

Based on the 16 September 2016 Statement issued by the EaP CSF Armenian National Platform, the Eastern Partnership Civil Society Forum states:

On 30 August 2016 in Moscow Sheremetyevo airport the border guards of the Russian Federation arrested Stepan Grigoryan, an active representative of Armenian civil society, former deputy of the RA Supreme Council and former adviser to RA Minister of foreign affairs, Chairman of the board at the Analytical Centre on Globalization and Regional Cooperation. After 10 hours of detention, during which his passport was seized, he was deported to Armenia from Russia.

The Russian authorities’ groundless and unlawful actions restricting the right to free movement of citizens of the Republic of Armenia are politically motivated, as Stepan Grigoryan actively cooperates with European non-governmental organizations as the head of the Analytical Centre on Globalization and Regional Cooperation, and does not conceal the fact that his organisation envisages the future of the Armenian people as part of the family of European countries built on democratic values. Stepan Grigoryan does not engage in any activity in the Russian Federation, and his cooperation, in Armenia or elsewhere, with international organizations recognized as “undesirable” on the territory of Russia should not have given cause for to prevent his private visit and the subsequent ban on his entry to the Russian Federation until 2030.

It is not the first time that Armenian civil society representatives have been targeted by Russian state or non-state actors of late.

The Eastern Partnership Civil Society Forum demands that the authorities of the Russian Federation cease intervening in the domestic affairs of neighbouring countries and imposing unlawful sanctions against their citizens according to their political views and civic activity.

The Eastern Partnership Civil Society Forum calls on the diplomatic service of Armenia to demonstrate adherence to democratic/these principles and consistency in the protection of the violated rights of the RA citizens.

The Eastern Partnership Civil Society Forum suggests that the representatives of its member and partner organizations reconsider the appropriateness of visiting Russia, as well as using airports in the Russian Federation as transit zones.

For further information please check the site of ACGRC

CREDITS: the cover photo has been taken from http://4.bp.blogspot.com